Alnwick Castle is the second largest inhabited castle in England. It has been home to the Duke of Northumberland’s family, the Percy’s, for over 700 years.

The castle’s rich history is brimming with drama, intrigue, and extraordinary people; from a gunpowder plotter and visionary collectors to decadent hosts and medieval England’s most celebrated knight, Harry Hotspur.

Combining magnificent medieval architecture with spectacular Italianate State Rooms, Alnwick Castle is one of the UK’s most significant heritage destinations. In recent years it has also taken starring roles in a number of film and television productions, featuring as Hogwarts School of Witchcraft and Wizardry in the Harry Potter films and as a location for ITV’s Downton Abbey.

With a history dating back to the Norman age, Alnwick Castle was originally built as a ‘most heavily fortified’ border castle with numerous defences. Purchased by the Percy family in 1309, it was transformed from a fortification into a family home for the 1st Duke and Duchess of Northumberland in the mid-18th century.

The castle’s State Rooms were restored in the 19th century by the 4th Duke, creating the lavish Italian Renaissance style that visitors see today, with one of the country’s most significant private collections of art, ceramics and furniture.

This remarkable collection includes works by artists such as Titian, Turner and Canaletto; an extensive gallery of Meissen, Chelsea, and Paris porcelain; and the spectacular Cucci cabinets, originally created for Louis XIV of France. From the windows of each room, the castle’s grounds can be admired, and beyond them, the landscape created by Lancelot “Capability” Brown.

The present Duke and Duchess of Northumberland still reside in Alnwick Castle, and so the history of the State Rooms continues today, with restoration works and ongoing daily care ensuring they remain in the finest condition.

Alnwick Castle offers a huge range of daily and seasonal activities all included in the price of admission. A day out to Alnwick Castle is brimming with excitement for all of the family. Activities include:

BY ROAD
Alnwick Castle is less than a mile off the A1 and is well signposted. The main castle car park is situated just off Denwick Lane (B1340), and the postcode for the car park is NE66 1YU. A parking charge of £3 per vehicle applies for the day, and the car park is open from 10 am during the castle open season. Please note only card payments are currently accepted.

BY RAIL
The East Coast mainline from London to Edinburgh stops at Alnmouth station, which is four miles from Alnwick. A taxi or bus (X18) can be taken from Alnmouth station (a journey of approximately 10 minutes).

Roadmap Out Of Lockdown For North East England 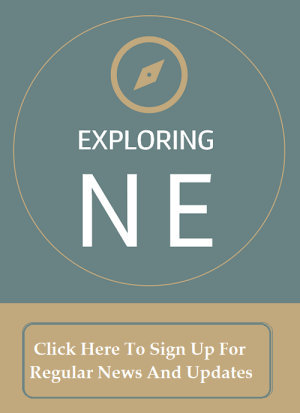 7 Quirky Staycations In And Around North East England